It doesn’t feel like autumn until we’ve gone apple picking! Last weekend, the sun was shining and the first batch of apples were ripe in the orchard. So, we took the 40-minute drive out to the country and filled some baskets with fruit from the trees.

Evie really enjoyed playing with the other children (some of which she knew from school) in the hay maze. She was quite difficult to catch–leaping over bales, whenever Nick or I indicated that it was time to move on to another activity. 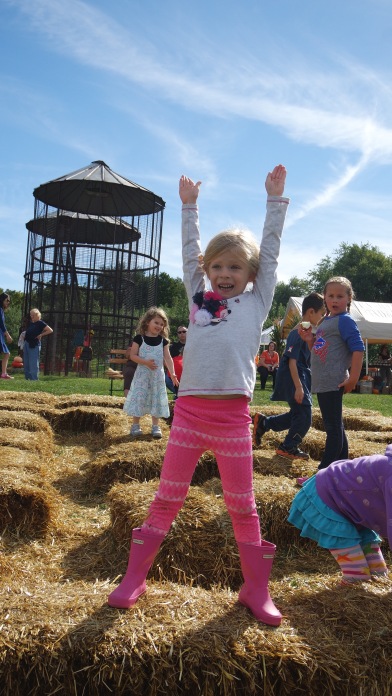 When we were able to drag Evie away from the hay, she became quite the adept fruit picker. This was the first year that she was actually interested in the apple picking part of going apple picking! But, then again, turning 5 has brought about a lot of changes-she is a baby no more!

We ended up well provisioned for fall–with quite a haul of pumpkins, preserves, a local bottle of Riesling, and of course, apples. The orchard has a small shop; other local vendors had also set some tents up around the farm (including wine tasting).

We always depart our annual orchard excursions with more in the trunk than we planned on. This year was a little more extravagant than most of the others. I am looking forward to opening up the cherry-almond butter (which is always delicious). I also have plans to coerce Nick into baking the season’s first apple pie!

You can check out our apple picking vlog here!

You can also find me here: